Danilo Dolci: Development and Opposition to the Oppression of the Mafia

“The Gandhi of Sicily”.

Danilo Dolci (1925-1997);  was active in the movement for world citizenship and deeply influenced by the non-violent methods of Mahatma Gandhi. He was often called “The Gandhi of Sicily”.

In 1952;  Danilo Dolci went to live in a small, very poor town of western Sicily. The towns-people watched him and wondered why an intelligent and well-educated man should come to live in an area where murder was commonplace;  and the poor stole from the poor. The people had tolerated Fascism for 21 years and the oppression of the Mafia even longer.

Danilo Dolci;  born near Trieste in the north of Italy;  was the son of a railroad official who had worked in Sicily in this youth;  and told his family of the poverty and suffering there – a place to be avoided if possible. When the Second World War began;  Danilo Dolci was conscripted but refused combatant training and was imprisoned. After the war;  he worked with a dynamic priest, Zeno Saltini who had built a community for abandoned children.

The Connections with the Mafia.

However;  Danilo Dolci went on to study architecture and town planning in Milan and Rome;  and wrote articles on the use of reinforced concrete. He had a spiritual awakening experience ; which led him to ask if his life goal was to build luxury apartments;  for those who were already well-off. He replied “no” and recalled his father’s accounts of poverty in Sicily.

Dolci moved to western Sicily;  and following the example of Gandhi; first set out to listen to the life experiences of the people around him. He later published these accounts in a series of books;  based on what the poor said of themselves and their lives. (1) Unemployment and under-employment were constant themes.

A job could be had only through the connections with the Mafia;  which controlled what little formal economy existed in the area. The Mafia had ties to the political structures as well as to the higher Roman Catholic clergy.

you might to be interesting read Simone Panter-Brick Gandhi and Nationalism.

Dolci worked simultaneously on two fronts. On one;  he tried to give immediate help;  on the other;  he tried to address the causes of misery. In 1956;  Dolci and his local friends launched a “reverse strike” by repairing a long neglected road. Their justification for this was Article 4 of the Italian Constitution which affirms that “all citizens have the right to work and to promote conditions which render this right effective.”

The day before this “strike-in-reverse” the 700 participants fasted in preparation. Dolci and 22 others were arrested and sentenced to four months in prison. The trial, however;  drew international attention to Dolci and his ideas and efforts.

Dolci established a Centro Studie Insitiative; a sort of village university, close in spirit to the Danish Folk High Schools. The aim was to disperse the despair and hopelessness that the Mafia and poverty had brought to Sicily.

His work was of small, patient steps. The path is not easy but is being continued by others for whom he set out the way. 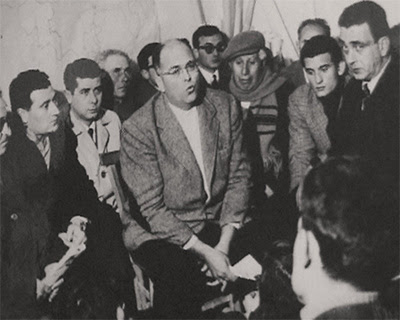