In early April 1976;  during the Qingming festival when the Chinese traditionally mourn their dead and sweep their graves;  millions of people went to Tiananmen Square to pay tribute to Zhou Enlai as a symbol of reason and rectitude after the chaos of the Cultural Revolution (1966-1976).

Yet as this first class biography of Zhou points out;  Zhou was not a model of rectitude but a survivor. “In China, it required toughness and ruthlessness to outlast, for more than half a century;  the incessant infighting that was endemic in the Chinese Communist Party. To hold the post of prime minister for twenty-six years, working under the command of one of the most powerful, capricious, and distrustful emperors in Chinese history, called for adroitness, adaptability and the capacity for shaping his positions according to the political winds, notwithstanding his own convictions.”

Zhou Enlai and Mao Zedong in many ways became a single soul in two bodies after 1943 when the doctrine that “Mao Zedong Thought is Marxism-Leninism, Chinese Bolshevism and Chinese communism” all at once was enshrined as sacred creed and guiding principle for the conflicts against the Nationalist government of Chiang Kai-shek and the Japanese.

Mao knew that he needed a skilled administrator and a subtle diplomat to meet with foreigners — skills which he did not have. Although Mao eliminated all those who had worked with him during the early years;  Zhou Enlai was with him until the end. Both men died the same year, 1976, as if the soul of one could not exist without the other.

It is a rare blending of destinies. Stalin, with whom both Zhou and Mao had to deal before coming to power and again once the Communist government took power in China, had no such agent of his will. Stalin ruled alone, destroying one after the other all those around him. Mao always had a faithful echo of his views in Zhou, even though Mao changed his views often, driven by myths rather than an overall view of facts. 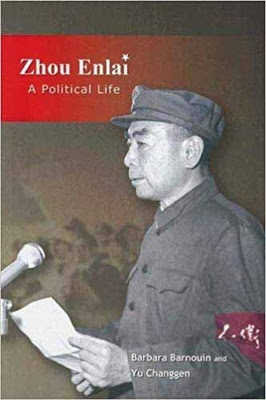 Mao and Zhou were very different persons. Zhou came from a mandarin family, highly educated but not wealthy or powerful. As Zhou’s father was often away seeking government jobs;  Zhou was raised by his aunt in his grandfather’s book-filled home.

Zhou learned to read early and became knowledgeable with classical Chinese thought. As there were many children in Zhou’s extended family, the clan had its own family school which stressed Confucian values and the concept of self-cultivation. In the Confucian tradition;  the first task of a learned person is to establish order and harmony and to serve his country and its people. The other Confucian value Zhou learned young was the golden mean — the avoidance of excess as expressed in a Confucian maxim “to go beyond is as wrong as to fall short.”

The Idea of Confucian Moderation

Although he was a party to all the excesses of his government, the idea of Confucian moderation stayed with him. Thus, there is a certain irony in that late in his life, during the Cultural Revolution when attacks on Confucian thought was a major policy, Zhou’s enemies, unable to attack him directly, associated his name with the Duke of Zhou, a famous civil servant of an early emperor.

After his home school, when he was 12, he started in a public school, living with his uncle in Mukden, then the capital of Manchuria. As Manchuria was a meeting point of cultures, his teachers introduced him to the intellectual debates of the time concerning patriotism, democracy and reforms influenced by Japan or the West. When his uncle was transferred to Tianjin;  Zhou went to one of the most progressive schools in China;  the Nankai Middle School;  influenced by English education with strict discipline, sports and intellectual debate. Zhou became the editor of the school journal — starting a life-long interest in writing as well as drama.

Zhou then attended Tianjin University; but already political debate and agitation took a larger place than his studies. This was the time of the “May Fourth movement” of 1919. Among the student leaders was Deng Yingchoa, Zhou’s future wife. Zhou’s student politics did not prevent him from getting a government scholarship to study in France, and in 1920, he left China first to visit England and then study in France.

In France;  he was caught up in the debates in French intellectual circles concerning socialism and the Russian Revolution. Zhou came to feel that Communism was ‘the wave of the future’ and with a few Chinese students in France organized the Chinese Youth Communist Party in Europe;  even before a Communist Party was officially organized in China.

Among these student leaders in France was Deng Xiaoping. There were also others who would become important leaders of the Party in China. Thus, Zhou established a network of relationships in Europe upon which he would draw for the rest of his life. Zhou had lived four years in France and so was knowledgeable of the Western world which would serve him in his diplomatic activities.

The subtitle of Barbara Barnouin and Yu Changgen’s deeply researched book A Political Life is unnecessary. Zhou had only a political life if one considers war making and espionage as politics by other means. From his return to China in 1924 till his death;  Zhou was in an endless series of adventures: military, diplomatic, administrative, and internal party politics.

He had no children;  and although his wife stayed with him to the end;  there must have been little time for family life. Zhou had many co- workers, but it would seem no friends. Those he had;  he was willing to sacrifice when the political winds changed. His charming personality, intelligence and eloquence allowed him to be in contact with many different people, and it is as a diplomat dealing with the Russians, the Americans, French, Central Europeans, Indians, Koreans, and Vietnamese that he made his mark.

From 1943 on  there are many crucial activities — the war against the Japanese;  the Chinese civil war and the establishment of the Peoples’ Republic;  the war in Korea, the break with post-Stalin Russia, the rise of the Non-aligned Movement, the war in Vietnam, the re-establishment of relations with the USA, and the Cultural Revolution — in which Zhou Enlai played an important role.

Yet whoever Zhou Enlai was before 1943;  afterwards his personality and individual goals were largely absent. There is only the administrator of Mao Zedong Thought. Zhou often had doubts about the aims and especially the methods of Mao, most strongly during the Cultural Revolution. Yet every time when speaking out might have made a difference in favour of a more rational policy, Zhou Enlai was silent.

He was willing to write elegant self-criticism of himself, and he was willing to turn away from colleagues or staff who were in political trouble. As the authors evaluate “Political survival clearly required Zhou to faithfully execute Mao’s arbitrary instructions. For this he had not much choice;  any defiance by him would have unavoidably resulted in his downfall, since an array of radicals was closely watching him and waiting for him to take a false step to oust him from power.” Thus on his tomb in those poster-size characters of the Cultural Revolution there should be only one word, “survivor”.